The Republic of Nava is a nation located on one large island and several smaller ones in the northern Atlantic Ocean, to the west of the Azores on the Mid-Atlantic Ridge. The capital is Nava City and the largest city is Ohiutuinu. The nation has a population of 54,145,238. The official languages of Nava are English and Navani. Nava is a member of the UN, European Neighbourhood Policy, Organization of American States, African Union (observer) and the CWCR and co-established it with Ostrobia.

Nava was first settled by Navani people at least 10,000 years ago. The Navani people mostly remained west of the Great Eastern Desert; the eastern coast was first settled by Arabs during the Middle Ages. There are some ruins in northeastern Nava near Horoni which suggest Nava was briefly settled during the Greco-Roman era, but said settlements do not seem to have lasted long or spread beyond the Horoni area. The first European colonisation of Nava occurred during the 17th century, mainly by the United Kingdom and Spain, and there were several conflicts involving the Navani during that period and later. The United Kingdom militarily took over Spain's territories in the 18th century, but the Arab settlements of the east coast remained independent. With aid from the United States, Navans waged a war of independence from the United Kingdom in the 1820s and won, with Nava formally becoming independent in 1827. The east coast settlements voluntarily joined Nava in 1845, but the Bay Islands were not incorporated until the 1880s; the Bay Islands retain some special autonomy within Nava, and there have been several movements attempting to achieve independence for them in the 20th and 21st centuries. The east coast settlements also initially had special autonomy before becoming full states and also retain some independence movements among their Arab population.

In January 1983, both Ostrobia and Nava created the CWCR by forming a "special membership group" which only comprised of Nava and Ostrobia, but soon expanded to other wikicountries. The CWCR original aim was to improve both living standards and political standards between the two similar countries which both Nava and Ostrobia experienced political turmoil during the 60s and 70s.

Between 1996 to 2000, the nation underwent a period of economic stagnation which saw GDP growth rates between 1995 to 1999 show at 19%. This is known as the Navan financial crisis.

Nava consists of the "mainland", with several smaller islands and disputed regions around it.

The Great Western Bay, which includes three relatively large islands (known as the Bay Islands), is a dominant feature on the western shore.

The eastern third of the mainland is dominated by the Great Eastern Desert and is sparsely populated, except for coastal regions (the east coast includes several large cities).

The largest mountain chain is the Southern Mountains in the southwest, which includes five peaks over five kilometers in height.

Nava is divided into thirteen provinces and four special regions, which are the capital district and the three Bay Islands; the Bay Islands are also referred to as territories or autonomous regions.

Below is a map showing the province borders. 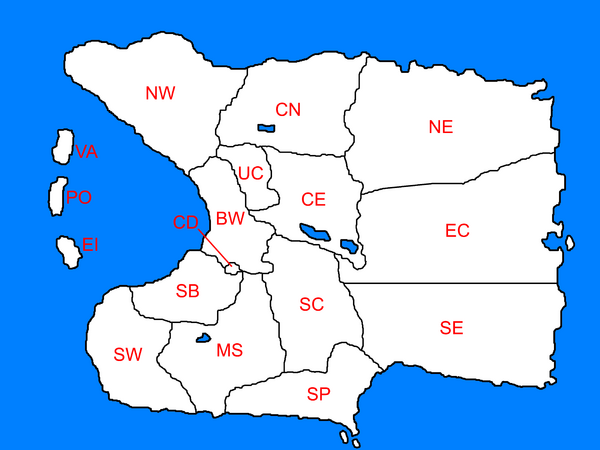 The economy of Nava is one of the largest economies in the world, it is a high income country with a high economic growth. It primary exports semiconductors, electronic products, coconut oil, petroleum products and fruits. Its major trading partners are the United States, Ostrobia, Spain, Brazil, Portugal, Germany, United Kingdom and Morrocco. Its unit of currency is the Navan haruthi.

The NSMX (Nava Stock Market Exchange) is Nava's primary stock exchange and the third largest by market capitalization in the CWCR nations, behind the Treien Stock Exchange and the SSX Euronext (Seblo Securities Exchange). It has a nominal GDP of $1,888,453 million (similar to Brazil) and a capita GDP of $34,878 (similar to Portugal and Malaysia). It's economic status is classed as a high income, developed economy, however it had seen massive economic growth after 1980, with it being classed as a developing country then.

The largest cities in Nava are Ohiutuinu, Uilavan (both in the Ohiutuinu Metropolitan Area in Bay West), Norahebva (in Eastcentral Land), Porira City (in the Porira special region) and Novatura (in Southeast Cape Province). The 53 largest cities in Nava (referred to as "The 53" and sometimes as "The 50", excluding the Bay Islands cities Porira City, Vaza City and Eiyaya City) are often considered as a group because there is a significant gap between them and smaller cities in terms of population: the 53rd most populous city, Clog, is two and a half times more populous than the the 54th. A full list of Navan cities sorted by population can be found here. There are also several multi-city metropolitan areas, a list of which can be found here.

Nava is governed by a President and a bicameral Congress. The upper chamber of the Congress is called the Senate and, somewhat similarly to the U.S. Senate, consists of three senators elected from each province, for a total of 39 voting senators (there is also one non-voting delegate from each of the four special regions, giving 43 total members). Like U.S. Senators, Navan Senators have terms of six years, and every two years there is an election for one Senator from each province.

Elections for the Presidency, Senate and House of Representatives usually take place on the second Saturday of June. The dates for gubernatorial elections are more varied. In recent years, some jurisdictions also allow early voting before the regular election day.

The cabinet/government consists of the Vice President and ministries and departments; the ministries are top-level divisions while departments are sub-ministries with more specific focuses. Ministers are appointed from the Senate by the President while underministers (department chairs) are elected from and by the House of Representatives.

The two main political parties of Nava are the leftist Social Party and the rightist Conservative Party. Other notable parties include the Muslim Party, the Green Party and the Liberal Party.

The culture of Nava was first influenced by Spain, Portugal and Africa. When the British and Germans later colonised the islands, they also influenced the culture, but some areas retained their Spanish, Portuguese roots. In the modern day, Nava has a mixed culture, with British culture dominant in the large cities of the west, Arabic culture dominant in the large cities of the east, Spanish culture in some areas in the southeast and central south and German culture in the some areas in the southwest. The culture of the Navani people can be found throughout the nation; it is most concentrated in the Northwest Cape Province and a few other cities with high Navani populations such as Luijui, and remains dominant in the Bay Islands, though their culture is somewhat different from the Navani on the mainland.

In the culturally Spanish regions, Navans congregate in barrios (Spanish for neighbourhoods). Barrios are community run areas that host local ammenities such as shops, local cafés and restaurants. The head of the barrio is called a barrioman whose job is to run the barrio, similar to a mayor, however in a smaller scale.

The national dish of Nava is a parahjao (mixed buffet) which is a buffet consisting various side dishes from different parts of Nava, such western Navan sausages, eastern Navan rice and Arabic grilled lamb. Each area of Nava has its different cusines.

Nava has a diversified media scene. Nava's main newspaper is the Navan Times with the Ohiutuinu Free Press and Westpoint Standard Times as secondary newspapers. Telecorp is the main public broadcaster and has three channels, Nava Network is the second broadcaster and is the main commerical broadcaster in the country. There are various regional television channels across the island too.

Retrieved from "https://nava.fandom.com/wiki/Nava?oldid=4610"
Community content is available under CC-BY-SA unless otherwise noted.